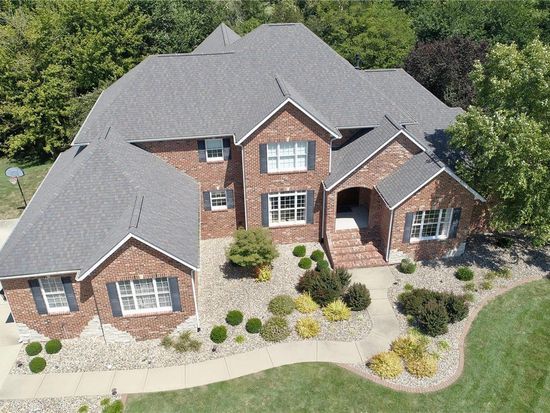 This Belleville home has an $18K tax bill, three times what it would be on a similarly-valued home in Missouri. | Zillow.com

Accountant Andrew Davidson is trying to sell his custom built four bedroom, four bath at 1825 10th Fairway Drive in Belleville, with more than 4,300 square feet on a one acre lot.

Asking $599,000, his is currently the most expensive home for sale in The Orchards, a golf course subdivision on the far southeast side of town.

A buyer putting 20 percent down and getting a 30 year mortgage at current rates can expect to pay $3,759 per month for Davidson’s home— $2,266 per month in principal and interest for the home, plus $1,493 in property taxes.

The property tax difference between Belleville and Crestwood, which if tax bills held firm would add up to about $288,000 over thirty years, explains why, as home prices soar nationally, in St. Clair County they have run in place over the past decade.

Home equity appreciation in the Metro East, like Illinois more broadly, is being siphoned away by local governments in the form of record property tax bills.

An analysis of home sales and tax bills over the first six months of 2018 by Local Government Information Services (LGIS), which publishes the Metro East Sun, found that 13 of 19 St. Clair County communities have effective property tax rates of more than twice the national average of 1.15 percent.

That means a homeowner in Belleville is paying $202 per month in property taxes, compared to just $80 on an identically-valued home in Missouri, where the average rate is 1.00 percent.

Belleville’s median home sale price for the first six months of 2018, rose nine percent, from $89,000 over the same period last year. But it remains 12 percent lower than it was a decade ago; the median sale price in Belleville in 2008 was $110,000, adjusted for inflation.

Some states, like Indiana, enforce a hard one percent cap on residential property taxes. That cap stops local government leaders there from, in effect, tapping taxpayers' home equity without their express permission to fund more spending, by way of higher tax bills.

The impact of a one percent hard cap, an initative being pushed in Illinois by the Homeowners Defense Association, a taxpayers' advocacy group, and supported by a slate of candidates for state office, is highest at the lowest end of the market, where effective tax rates border on the absurd.

The buyer, if they put 20 percent down and secured a 30 year mortgage, will pay $26 per month in principal and interest and $149 in property taxes.

The following table ranks St. Clair County communities by the change in their median sale price from 2017 (full year) to 2018 (Jan. 1 through June 30).